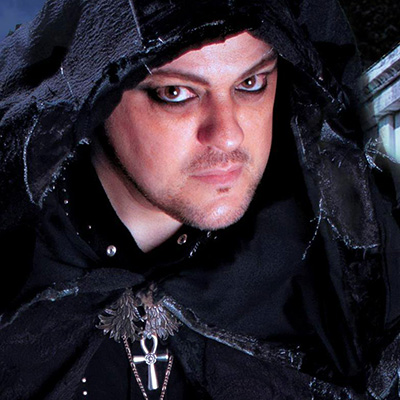 Christian Day is a modern-day Warlock living in the Crescent City of New Orleans, Louisiana and, with his husband warlock Brian Cain, owns Warlocks, Inc., a business umbrella dedicated to their various business pursuits. Christian and Brian host HexFest, an annual weekend of Witchery in New Orleans and Festival of the Dead, a monthlong celebration of the spirits held each October in Salem, Massachusetts that includes such popular events as the Official Salem Witches’ Halloween Ball, an Annual Psychic Fair and Witchcraft Expo, and an authentic séance. Both an initiate and practitioner of the ancient arts of Witchcraft, Christian sees his practices as both a spiritual priesthood devoted to the magic of the old Gods and the practice of old world folk Witchery, healing, and communion with the dead. Christian and Brian own two occult shops in Salem, Massachusetts: HEX: Old World Witchery, dedicated to the practices of Witchcraft, Hoodoo, and Conjure, and OMEN, a psychic parlor and Witchcraft emporium which features a staff of gifted psychic readers. In 2012, he also opened a Hex shop in New Orleans, where he now lives and opened an Omen there in 2019. Among his many media appearances, Christian has been featured on The Travel Channel’s Ghost Adventures, Showtime, TLC, MSNBC, Biography, Dish Network and in The Chicago Tribune, The Wall Street Journal, The Boston Globe, The Boston Herald, CNN.com, USAToday.com and, of course, The Salem News.

Christian Day has a table in our Vending Area!