After our Friday evening Riverboat Ritual, the following two days of HexFest 2023 will be held at The Bourbon Orleans, New Orleans' most haunted hotel. Located in the center of the French Quarter next to the famed St. Louis Cathedral and Jackson Square, this charming hotel is just steps away from incredible Creole and Cajun food, exquisite shopping, and authentic magical history. With its grand lobby, opulent historic ballroom, finely appointed rooms, gracious staff, elegant balconies, and gorgeous courtyard and pool, the Bourbon Orleans Hotel offers you the quintessential New Orleans experience.

HexFest is open to locals and visitors alike, so hotel stay is not included in your registration and must be booked separately in advance so please book online though our custom booking page. To book by phone, please call the hotel directly at (504)-571-4626 during business hours and mention HexFest! You can also choose a hotel nearby.

The map below highlights in red the rooms associated with HexFest. See our event schedule to learn which workshops will be held in each room. Our Vending Hall is located in the Orleans Ballroom, which can be reached either by stairs or elevator from the lobby.

The Haunting History of the Bourbon Orleans #top

Our friend Kala Ambrose, award winning author and radio host, has shared with us this excerpt from her fabulous book, Spirits of New Orleans: Voodoo Curses, Vampire Legends and Cities of the Dead (2012, Clerisy Press). This is a great book to learn more about our haunted city!

Perhaps one of the most haunted sites in all of New Orleans is the building now known as the Bourbon Orleans Hotel. Built in 1817, the original building was created as an opulent and acclaimed ballroom, known as the Orleans Ballroom, which offered fine dining and dancing. It also had the attached Orleans Theater next door, offering the best in French opera entertainment. The balls held at this location had a reputation for being some of the most elaborate and stunning, so much so that it appeared that some of these attendees never wanted the evenings to end. The stories of ghost sightings at this location say that some of the women who attended the quadroon balls, elegant affairs where white men of wealth and distinction would meet free women of color to take as mistresses, have lingered on in the afterlife, still dancing and sashaying in their evening gowns, hoping for one last dance with a handsome gentleman.

Guests at the hotel throughout the years have reported seeing one particular young woman from this era. She is described as irresistibly beautiful with almond-shaped eyes and dark upswept hair, with a jeweled comb tucked behind her ear. The rustling sound of her ball gown is often heard before she appears. Witnesses report hearing music playing and see her dancing and humming to the music. She appears to be stuck in this moment, all dressed up and preparing for her big evening of dancing. She never appears to notice the guests who see her, nor does she interact with anyone in the hotel. She simply appears looking stunning, and as the music plays, she dances and sways in her beautiful gown, only to disappear again a few moments later . Other guests have reported seeing her in the evenings on the balcony of the hotel, wrapping her arms around a young man in an intimate and loving fashion.

As the Civil War changed the destiny of New Orleans, the building was sold to the Sisters of the Holy Family, the oldest female-led African-American Catholic nun order in the United States. The four women who established the order turned the building into a convent and school, and the Orleans Ballroom was used as their chapel. Later in the 1960s, the building was placed back up for sale, and it was purchased and renovated into the Bourbon Orleans Hotel.

Due to the history and legacy of the property, the hotel is considered to be one of the most haunted hotels in the city, with more than 20 different types of ghosts and hundreds of paranormal activities reported in the hotel on a regular basis. There are an impressive number of reports by guests and staff, who have seen the ghost of the Confederate soldier who walks the halls at night on the sixth and seventh floor of the property, pacing up and down as if expecting trouble to arrive at any moment . He carries a gun and quietly walks back and forth as if on guard duty, and occasionally tobacco smoke can be smelled before he appears.

Ghost children are frequently reported playing throughout the hotel, and ghosts of young women are often seen, both of which are attributed to the times when the nuns owned the property and, along with a school, provided a medical facility and orphanage. It appears that some of the children who were cared for during this time died while under medical care, and their spirits remain on the property, playing in the halls. They often are heard laughing, shouting, and running down the halls so loudly at times that guests will open the doors to see why children are running around so late at night, only to see the ghost children and watch them disappear before their eyes or to see nothing at all. Many locals surmise that the children most likely perished during the yellow fever epidemics in New Orleans. Due to the feverish state they were in when they died, the children may not have realized that they were dead and, instead, woke up feeling better and went back to playing in the orphanage as they did each day.

Most of the ghosts appear to go about their daily and evening business, dancing, patrolling the halls, and playing, yet there is one guest who is frequently seen in the lobby who does not care for visitors. Described as an elderly gentleman, he appears to enjoy spending late afternoons seated in the lobby area while reading the daily paper and smoking a cigar. His ghostly apparition is so solid that many people reportedly mistake him as a guest and ask him to extinguish his cigar as the smoke is bothering them. When this interaction occurs, he is reported to give them a haughty look, stand up angrily, gather his paper, and march away, when he then disappears into thin air. It’s easy to imagine the shocked look of the guest who, having just insulted the man, now discovers they were talking to a ghost. I would think that if they ran into him again during their stay, the encounter would not be as pleasant, which is a good reminder to be kind and polite to strangers you meet everywhere.

One of my favorite reports about the ghosts at the hotel came from several locals I met in a bar on Bourbon Street, who shared with me what they had heard about the haunted Bourbon Orleans Hotel. They said there once was a guest who stumbled back to the hotel after an evening of heavy drinking on Bourbon Street. He was very loud and rude and had become disorderly in the halls , speaking profanity and being a drunken public nuisance in general. As he was walking down the halls in this manner, he experienced the feeling of being slapped hard on his hand. Stunned, he looked up to see a nun standing in front of him. His friends reported hearing the slap and seeing a red mark on his hand after the incident. Growing up in Catholic school myself, I remember the slaps from the nuns, and this would not be surprising at all to hear that they are still patrolling the halls in the afterlife. They definitely would not like to hear profanity or to see someone wandering the halls late at night while being loud and rude. It’s nice to know that good manners are still being impressed upon visitors and locals alike in the good establishment.

By Kala Ambrose, Reprinted by Permission from Spirits of New Orleans: Voodoo Curses, Vampire Legends and Cities of the Dead 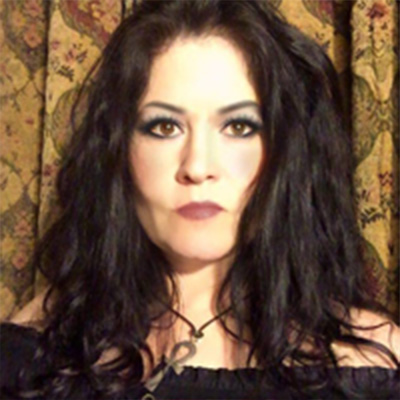 Christine Stephens
“The riverboat ritual was more than I could have hoped for, the presenters were incredible and I truly wish I could have seen them all. The attendees were nice and fun. I learned some new things, I met some new friends. I also had a few wonderful and unexpected surprises along the way.”
Rose, MA